Get me outta here!

She laughed even when she didn’t want to. She didn’t cry even if she wanted to.

She decided to give everything up for you. Her plans, her preferences, her loyalties. She could be happy any which way. So why not be happy for making you happy.

But you decided it wasn’t enough. She was exactly what you had dreamed of, but she had to be exactly like you had dreamed. To sculpt her into that goddess of your dreams, that was all you wanted. Without realizing that dreams flit away the moment once you awaken from your slumber; but by then, it was too late.

You had let her go.

And she, the creature of sacrifice, the goddess from your dreams, decided you were right. Once again.

So she didn’t even look back once. And you – you let her go.

Inspired by the lyrics of “You Let Her Go – Passenger”

With the new year already in full swing, here are the most popular posts from 2013, as voted by you and your visits:

Thanks for all the love!

This was the first time he had said it out loud. He just hoped she didn’t think he was crazy. But he didn’t think she would. He had only shared his deepest secret with her because he felt a connection with her; like he had never felt before.

She looked right into his eyes and took his hand, so that he could see – know – that she didn’t think him crazy. Not at all. In fact, she thought they were perfect for each other. She would just hold off telling him her secret for a little while longer, though.

And why not? After all, she had all the time of the afterlife.

Princess Amelia lay down to sleep, savoring the day.

She recalled the details with delight. And why wouldn’t she? It wasn’t everyday that one was crowned a princess!

She had been unable to sleep the night before. The small rectangle of light coming from the slightly-ajar door was comforting. As were the shadows that flitted across it a few times. She knew she was safe.

Yet, something disturbed her and she had kept tossing and turning all night.

The next morning, Madame Orth had loudly bustled into the room at the first hint of dawn, followed closely by the dainty Monsieur Befort. They both seemed very pleased as they called out to her to rise and shine. She could barely open her eyes and wasn’t able to suppress a yawn.

Both the adults beamed at her and told her all about how she was a princess!

They were sorry for her lack of rest but the night had been a small test. Her restlessness proved that she was the lost princess. They had been searching for her for years and now they had finally found her. They were so, so happy. What a good turn of fate! The gods were smiling on them for returning the true princess of the kingdom to them!

And before she could take another breathe, she was whisked off for a tour and an introduction to everyone and to bathe and have her hair done and her face made up and dress. She went up the stairs and she went down the stairs. She shook hands and she curtsied (after Madame showed her how it’s done). She held in her stomach as they tightened a corset around her waist. The soles of her feet hurt as she was made to try on dress after dress after dress and walk in heels as high as she was herself!

Madame finalized a mauve dress for her, offset with lots of pearls and diamonds. The clothes felt luxuriant against her skin and made up for how uncomfortable her hairdo and shoes were and the jewelry scratched her.

She was really grateful once the feast was underway. Now all she had to do was sit in the high chair in the middle of the room and observe the festivities.

Everything around her twinkled immaculately, including the guests. As Madame introduced them, they deferentially bowed to her. Raised their glasses and toasted the return of their princess.

Her heart had thudded really loudly in her chest when the time came for the crowning. The ceremony otherwise was boring, with lots of chanting. She barely heard a word; her eyes were riveted on the tiara sparkling in front of her.

Oh, that was her favorite part, the way it twinkled in the light! And she was sure she shone with it!

She sighed contentedly and settled deep into her soft bed, trying to find the perfect position.

First she turned to her right. No. It doesn’t feel right. So she shifted to her left. Nope.

Hmm. Maybe she should try lying straight on her back. Arms crossed on her chest. Or maybe arms up behind her head? She could just tilt her head a little. Okay, what about on her stomach?

But no matter what she did, Princess Amelia could not settle in.

She had been unable to sleep the night before. The door was closed today and no “comforting” rectangle of light reached her. No shadows flitted across the room. She knew she was safe.

At least, she felt safe.

But in her heart, she knew.

Tonight was also a test and something disturbed her but it was not the pea.

It was not the pea and she didn’t know what to do. It was simple, she had thought.

Only now she realized it wasn’t as simple as that. And now, it was too late…

So she kept tossing and turning all night. 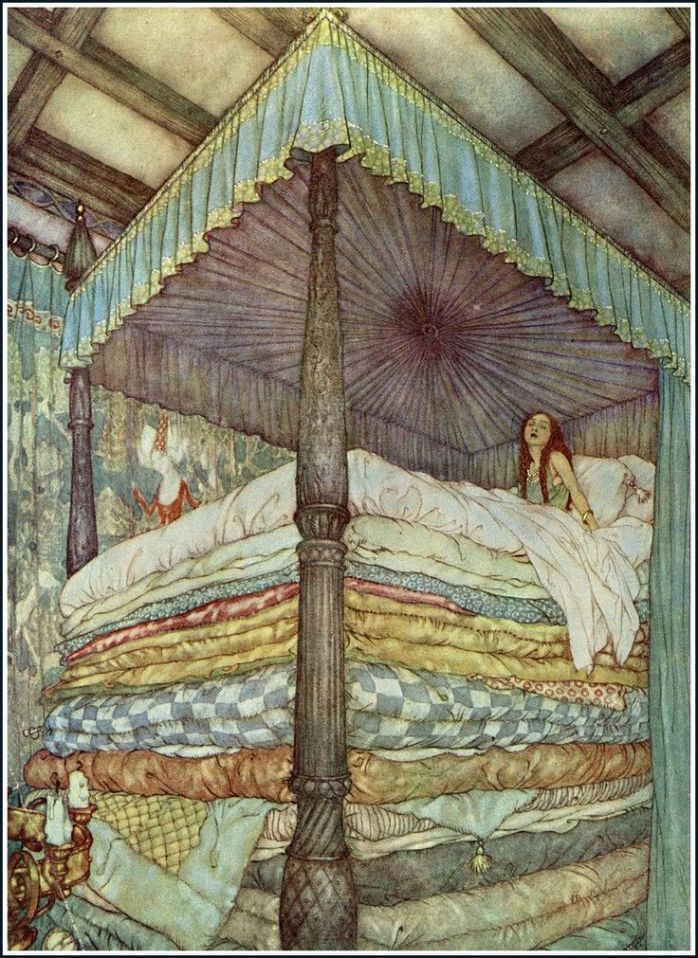 The young Queen surveyed her guests contentedly. The ball was well underway. The musicians had struck up a faster tune and the dancing party had increased. She could hear the tinkling laughter and the clinking chalices. Feet shuffled  daintily as their owners twirled their partners. 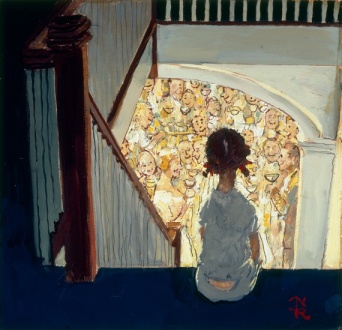 The merriment wouldn’t end until dinner was served and it was almost time for the feast to begin. She was waiting for the gong to sound to descend and take her place at the head of the table. Her guests would then follow suit according to their positions.

She suddenly noticed a movement in the far corner. Sir Alex! He was cutting through the throng and seemed to be headed straight towards her. Her heart skipped a beat. He was too handsome and the Queen was very fond of him.

“Now, what did we talk about, Quinn?” he asked her.

“Oh, but daddy. I want to join the party. Please?” she tried to plead with him once more.

“My princess, you may, but when you’re a bit older,” said he, while kissing the top of her forehead.

With that, he scooped Quinn in her arms and carried her upstairs to her room to put the Queen to bed.

All good things to those who wait…

Like a shower with “normal” water despite the heat of the day.

Like electricity after at least eight hours of absence.

Like the delight of a four-year-old on sharing candy.

Like sleep after tossing & turning in bed for hours.

Like hope for another day as there’s always tomorrow.

As is evident, I am caught by surprised and can’t really think of much to say; made worse by the fact that I have been too caught up with “life” and haven’t been paying the blog much attention *embarrassed*.

But, I would like to hear from you! If you have anything to tell me, feel free to comment below and do so.

All the content on this site is original. Please do not copy, plagiarize or use anything without permission or due credit.

If anything is reblogged or posted from somewhere else, all due credit is given. In case something isn't, please feel free to point it out.

Thank you for taking time out to read this blog.

You are welcome to leave your comments/opinion anytime.